I want to introduce you to the modified John Deere 8R Series tractors for Farming Simulator 19, and where to Download it.

I have only great things to say about the vanilla version, made by Giants Software and its people. But it’s amazing to get to drive modified versions like this one. It adds more choices, more benefits to the gameplay.

This modded version has an extra engine option, the 8400 R-SE. This engine brings a staggering 650 horsepower to the game. Powerful? Yes! Realistic? Not quite… Some of the color options are imaginary, as well. Yes, I’ve seen black John Deeres. But an orange one? Or dark red or blue ones are pretty unusual.

One cool thing about the color options is that they are also available for the attachers. So, when you want the “Black Beauty” version of the JD, you can have matching colors for the attachers too.

You have several wheel options to pick from. One of the best-looking combos is perhaps the Michelin Big Boys wheels. If ground compaction were a thing in FS19, those wheels would have helped tremendously.

Other stuff? Yes, the cabin windows have tinted glass, you can add a couple of different license plates (German) to the tractor. And there are several logo variations to toggle between.

And before I forget. The mod includes 3 different John Deere weights that also can be colored.

Here’s a more detailed look at the modded John Deere by the FSM Team:

No errors, nor warnings in the log. But there’s something strange going on with the connection hoses and the rear PTO.

(Updated August 30, 2019) The unruly PTO/hoses don’t act bad all the time. It’s only with certain implements it seem to get a bit “lost…” (Thanks Totenfarmer for making me aware of it.)

The FSM Team has chosen to host the mod over at Uploaded.net. The blue button below opens the download page. 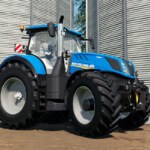