Do you want to try your farming luck in the eastern parts of Europe? Then you won’t probably find a much better map than this one.

The Slovak village map has all Farming Simulator 19 features. And then some. A lot of the fields are square, but there are also several irregular shaped fields.

If you use this map in the New Farmer mode, animal pens for cows, sheep, pigs, and chickens are already in place. All enclosures are ready for the Animal Pen Extension mod.

The main farm, in the New Farmer mode, is big and impressive. It makes perfect use of many of the (updated) buildings veteran farmers recognize from the FS15 Sosnovka map. And yes, you can sell many of the buildings and the objects.

Note: All railroad silos, selling points, and shops have their specific opening hours. Want to sell or buy after the opening hours? Too bad. You have to wait until they open.

You’ll find your Farmhouse inside the village. It has both a chicken pasture and a sleep trigger.

You can produce much of the stuff you need yourself, like seeds, fertilizer, and manure. Just add the required ingredients to the different production facilities. You must install the GlobalCompany mod for this. When enabled, the GC mod will inform you of what you need at each production station.

One of the many cool features on this map, is the Manitou forklift at the vehicle shop in the city. You don’t own it, which means you can’t tab into it. But you are still free to use it. You have to enter it manually. It’s great for loading the pallets you buy onto a trailer.

The Slovak Village map has several factories. There is, for example, a meat factory and a soymilk production plant. The Globalcompany mod runs all the factories. Again, the GC menu will help you figure out what you need to get the production going.

There’s also a quarry inside the forest. Here’ you can extract stones, gravel, soil, and gold. To get started, you’ll need fuel and things that go boom! (The shop has everything you need, like cement and dynamite…)

The quarry is the perfect place to put stuff like excavators, for example.

It also has some really cool animations.

Here’s an overview of where you can unload gravel, stones, and soil:

A vast forest covers the western part of the map. Besides looking awesome, it’s also a magnificent place for forestry fans.

You can turn logs into pallets, which are essential for several of the factories. The pallet production takes place at the factory inside the forest. There’s also a standard Farming Simulator sawmill just outside the northern part of the woods.

You’ll find all of them inside the Placeables category in the shop.

Here are some of the map maker’s best tips for a great start with the Slovak Village map:

The Slovak village map works perfectly with Seasons 19. The mapper has made sure much of the textures change during the seasons, and not only the leaves on the trees.

The texture changes also happen to stuff like the foliage and the distant mountains, which is a nice touch.

He has also made a custom GEO for his map, which you can find on the official Modhub (see below.)

To make the most of the Slovak Village map, you’ll need some mods. Here they are:

Each time I open a new map, I want it to have an atmosphere. I want the map to give me a good feeling. This map does that. Immensely! It’s a fantastic creation. It has tons of atmosphere, thanks to a great layout and skillful mapping.

The map has so many great details. The creator must have spent an insane amount of time, getting it as close to reality as possible. For example, the forest area is one of the best I’ve ever seen in FS19. All in all, it’s one the best, most beautiful maps so far.

Despite all the details, like static cars, trucks, and farm machinery, the map runs smoothly on my mid-level gaming rig.

If you want a video tour of the map, check out Farmer Klein’s impressive presentation on YouTube.

(Updated March 17, 2020) One of the best Farming Simulator 19 maps just got a whole lot better. MrHector released an update last weekend with several fixes and tons of additions. And no, the new version does not require a fresh gamesave.

MrHector has written an extensive changelog for the 1.1.0.0 update. I recommend that you read it for yourself, but here are some highlights:

The new version of the map comes with a modded Thunder Creek FST990 fuel trailer, making it easier to fill up factories that require fuel.

MrHector has also added support for Wopster’s Manure System mod to the pig and cow pastures.

To get your hands on the stunning Slovak Village map, you must visit the release post on Facebook. The blue button opens it. Just look for the download link at the bottom of the post. 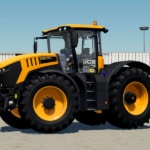