FS 19 mods showcase: The New Holland US tractors pack, including the T5, T6, and T7 series, modded by JT Modding. If you’re just looking for the download link, it’s located at the bottom of this post.

I’ve followed JT Modding for a while now. His or her modding skills have improved dramatically over the last couple of months. These Americanized New Holland mods are pretty close to perfection.

If you compare actual New Holland tractors across the pond, you’ll spot several visual distinctions. Many of the North American particularities have been added to the mods at the expense of European styled visuals.

All tractors in the pack are dyeable, with the T7 having the most color options. All cab windows are tinted by default. For the T6, the tinted windows are a configurable option together with standard windows.

Each model can be equipped with front loader attachers, even the T7. If you’re going to add a front loader to the T7, just make sure it’s wide enough not to get stuck to the tractor after detaching it.

This pack of US and Canadian looking New Hollands is a nice alternative for anyone looking for authentic North American models. Want a great T8 to top the team? Take a look at this beauty by NEFG Modding. Here are the T5, T6, and T7 facts:

The T6 model has an option for adding a chromed New Holland logo to the bonnet/hood together with the more familiar logotype. The chrome versions appear when you toggle between the engine options in the shop. Here are more specs:

It sounds fantastic, using custom-created audio! And now, some specifications:

After using the tractors, this small error showed up in the log:

It’s not at all alarming or game-breaking. But now you know about it.

To get the North American versions of the New Holland tractors, you need to visit JT Modding on Facebook. The blue button below opens the release post for you.

(Note that you need to unzip the file first by using, for example, 7-Zip. Then, copy the 3 tractor files to your mods folder.) 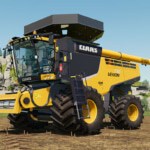