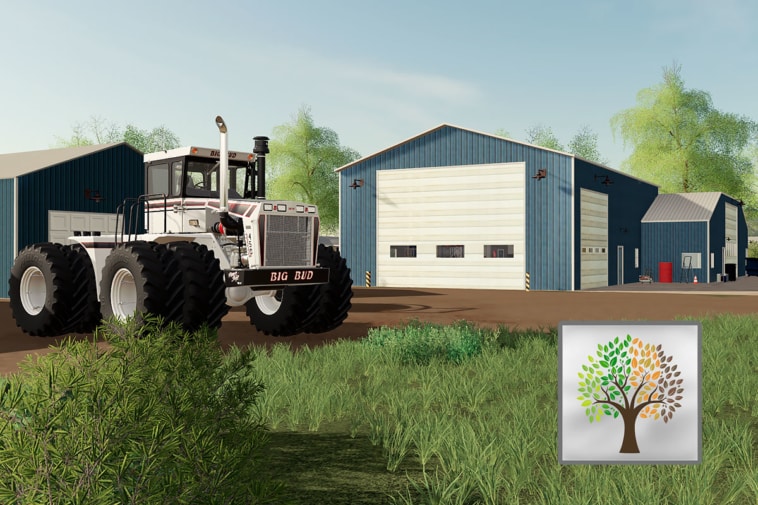 Farming Simulator 19 mod map presentation: The Welker Farms Map by Mappers Paradise. The download information can be found at the bottom of this post.

This was one of the most popular maps for Farming Simulator 17. Now, it’s already a hit with FS 19 fans, with a score of 4.3 out of 5 last time I checked.

The Welker Farms map is based on the actual Welker Farms in Montana, USA. The farm is run by Bob Welker, together with his sons Nick and Scott. Besides doing farm stuff, the farm also operates one of the most popular farming channels on YouTube, with almost 300,000 subscribers and more than 40 million video views so far.

Part of the reason for the Welker Farms’ rise to the stars has to do with the Big Bud tractors. The Welker family is operating no less than 3 Big Buds.

The Farming Simulator 19 version of the Welker Farms map is a worker’s map. It’s all about the fields, which occupies almost all the available space. Most of them are large and square. But there are some fields to break the monotony, posing quite a challenge if you’re going to work them manually without too many overlaps.

No Animals at Start

Staying true to the real-world Welker Farms, there are no animal pens on the map when you enter it for the first time. Want animals? Just buy some placeable pens and use the in-game landscaping tools.

The map includes several custom-made placeable objects. There are plenty of sheds, houses, and silo complexes made especially for the map.

Yes, the Liftmaster inside the shop works…

… But there’s a reason there’s a sign in front of it that says “Don’t Break the Roof“… Besides, it’s kinda tricky to get vehicles onto the ramps.

Mappers Paradise has managed to create a beautiful map that oozes atmosphere. It honors the real-life farm. And many of the custom-built objects included with the map looks stunning. Here are some of the details:

The first Farming Sim 19 release of the Welker Farms had some issues. But now, all the bugs are fixed. The map is also updated to work with the 1.1 version of Seasons 19. And there have been some adjustments to the main farm layout.

Are you using Seasons 19 together with the map? If you don’t know it already, there’s a GEO mod for Seasons that fits the map perfectly. Click here to read more about the Montana GEO mod.

You should also download both the Big Bud tractors from the modhub (here and here) before you start your game. They are part of the starting machinery.

(Updated November 8, 2019) The Welker Farms map now includes some fixes for version 1.1.0.0. Yes, this update requires you to make a new gamesave. Here’s what has changed:

Perhaps, the most visible change is the removal of the distant mountains. Instead, there is now a map border made up of trees around all of the map.

The FS19 Welker Farms map is available on all platforms through the official modhub, either in-game or online (click the blue button to open the mod page.)