The new version of the Hof Bergmann map for Farming Simulator 19 is a massive update. In fact, there's so much that has been added and changed, I decided to dedicate a separate page to it. Are you ready? Here we go!

First ofall, there have been some fixes. The Hof Bergmann map now works with the Giants1.4 patch. Much of the stuff on the map, like parked cars, has been reworked.And some broken triggers have been repaired.

There is alot of new stuff on the 1.0.0.4 version of the map. Like a new shop categorycalled "Production equipment." Here, you'll find productionmods like the Buttermax, FertiMixerLQ, FertiMixerSLD, and CompostMaster.Yes, compost is now built into the map.

You canalso buy the FertiPro BigBags (required for liquid fertilizerproduction) and refillable milk buckets in the shop. There's a new silo inthe Placeable | Silos category. This dispenser silo is required when youwant to produce solid fertilizer.

A new gatehas been added near the cow barn. A placable bunker silo is available in theshop, while there's already installed a new drive-through silo in the woods,near the cows.

A new calfspecies has been introduced to the map. These calves reproduce and need milkand straw to be happy. Now, there's also a butcher in the village. Whenyou deliver the animals, you get different kinds of meat in return, which canbe sold in the yard shop.

(Theunloading trigger for the animals is located at the back of the slaughterhouse,in front of the gate. The trigger isn't working all the time. But when you getthe "Not accepted here" message, just try once more.)

Movingon... A new barn islocated opposite the grain warehouse on the farm. Fruit trees are also in.These can be harvested using a fruit box (placeable versions of the treesare available.)

Thegreenhouses have been rebuilt. They now work with the GlobalCompany script.They produce salad, tomatoes, red peppers. The vegetables and fruits can besold in several places, at the farm shop and the restaurant, for example.

There'salso a container for rainwater. It will fill up during rainfalls and can beemptied using a tanker trailer.

Finally,there are several new storage facilities, all based on the ObjectStoragescript from GtX|Andy.

You get thecheese loaves from the cheese dairy by requesting them at the table to theright of the shelves.

Some of the Changes

The newversion of the Hof Bergmann map is more than just add-ons. Several things havechanged too. Here are some highlights:

Old slurryvalves (you know, the red ones...) have been replaced with new ones. Thelatest versions require interaction to work. Put simply, the lids must beopened.

More angleshave been built into the fields, giving a more natural look when doing fieldwork.And the two, vast meadows are now defined as fields, making grass missionspossible. The fields are numbered 16 and 17.

The main cowshedis upgraded with a functioning milking robot and a fence around the slurrytank. More importantly, the models of the cows have been adjusted to a morerealistic size (they were too big in contrast to the player...)

The buyabletransport pallets have been slightly enlarged. They should now fit pallet forksbetter. At the sawmill, the area for log sales is marked by heaps of logs.

The compostsilo is reworked. It now consists of 2 separate bunkers.

The BGAarea is slightly redesigned. And the double driving silo at the main yard isoverhauled. The left bunker is still usable for silage production, while theright bunker now serves as storage for all bulk goods.

The food,water, and straw consumption by sheep and goats have been reduced slightly. Thefarm shop is extended by 2 outside shelves. They appear 1 hour before the shop opensand disappears one hour after closing time. They can be used for vegetable butnot meat. Meat should not be offered outside due to fly infestation...

And whenyou want to sell stuff to households, note that their gates are open between8-19 o'clock (8 am - 7 pm.)

Yes, thereare several vehicles included with the 1.0.0.4 version of the Hof Bergmann map.There's, for example, the MAN truck for livestock transportation and a FordTransit van, that has various configurations.

Phew! I guess that covers most of the new version of the map. Click here to get back to the main story, with directions on where to download it. 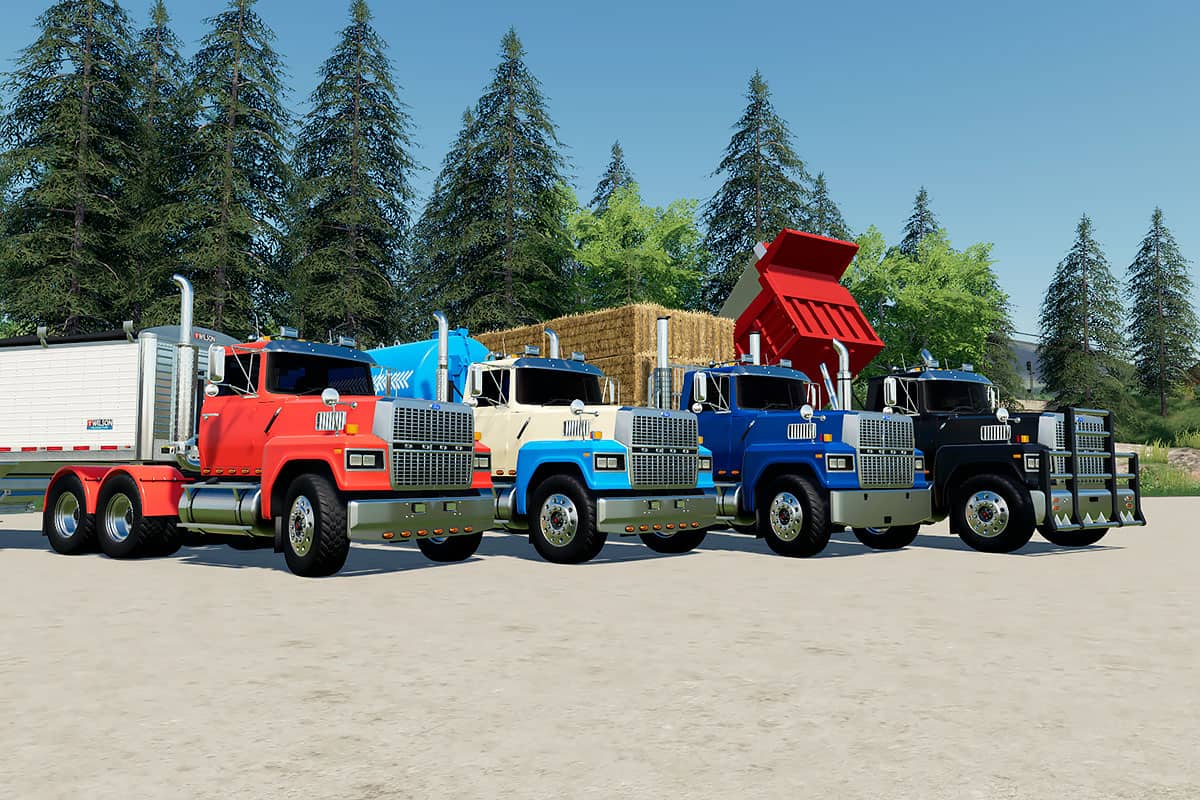 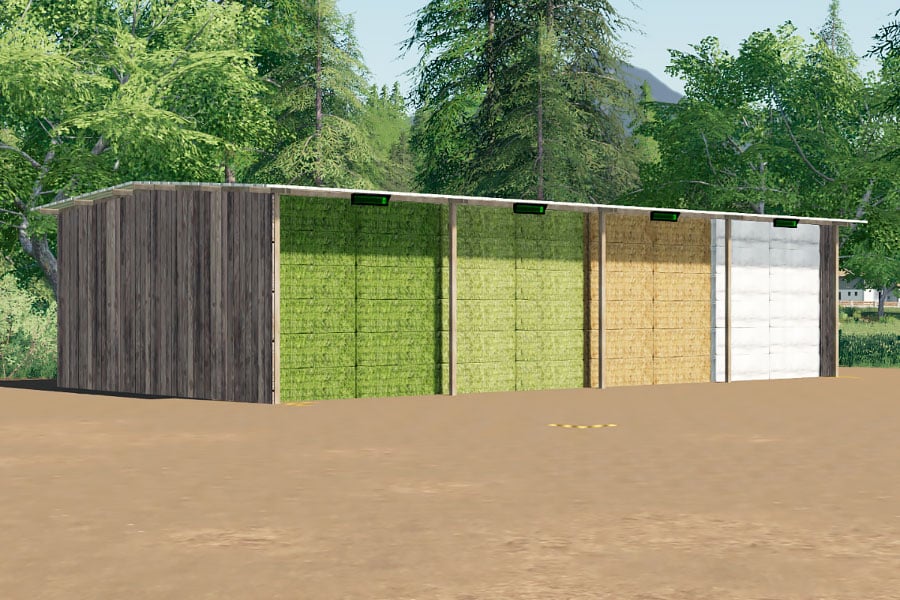 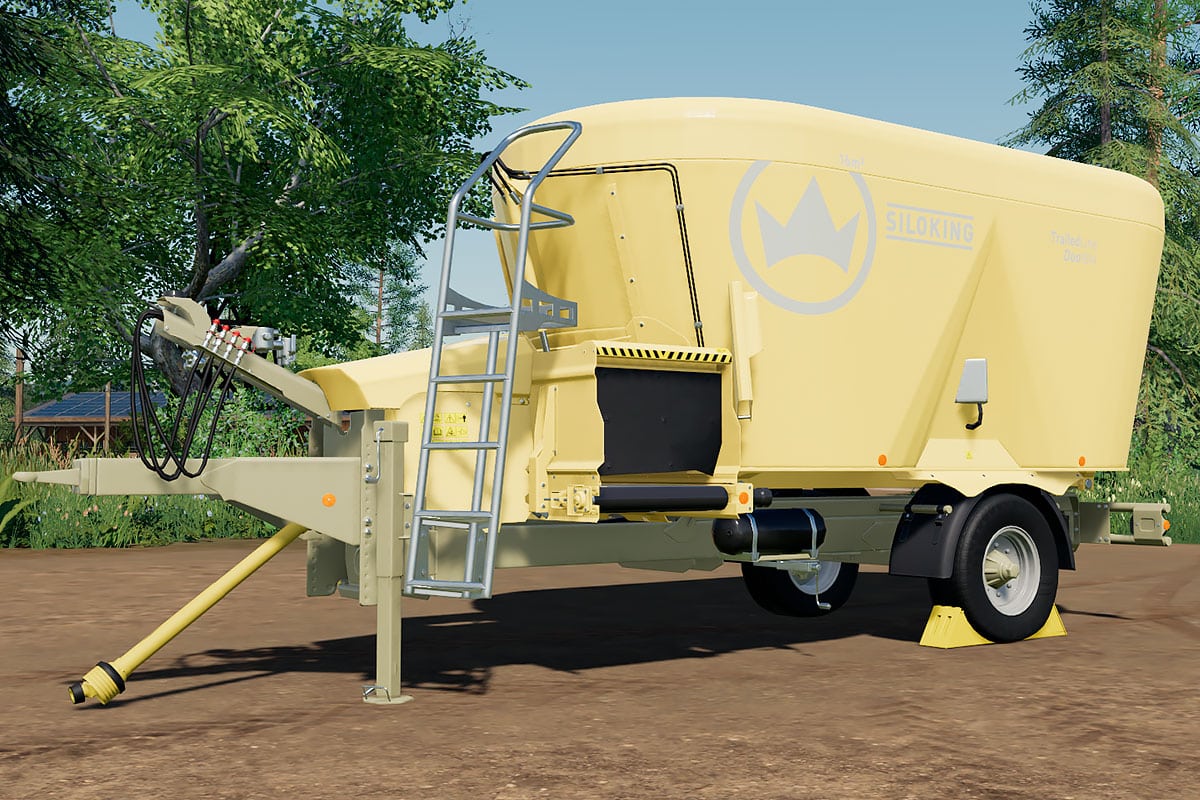